Heartworm is  a parasitic worm, Dirofilaria immitis, which lives in the heart and circulatory system of its host. Heartworm mainly affects dogs and wild canids, such as dingoes, but can also infect cats and ferrets. The effects can be severe, even fatal, so a well-managed prevention protocol is essential in high-risk areas.

How do pets get heartworm?

Heartworm is transmitted from dog to dog by mosquitoes.

Adult worms live in the right side of the  heart and the arteries which carry blood to the lungs. After mating, the females release larvae into the blood stream. These larvae are called microfilarie and travel in the blood vessels all around the body.

When a mosquito takes a blood meal from the host they often take up a few microfilariae as well. The microfilariae develop inside the mosquito for between eight to thirty days, depending on the temperature. Once they’ve finished the next stage of development, the larvae migrate to the mosquito’s mouth. When the mosquito next feeds, they are injected into the new host’s skin, from where they penetrate the veins and travel to the heart. The larvae take three to six months to develop to adults and begin releasing microfilariae, starting the life cycle again.

This period between initial infection and production of new microfilariae can be up to eight months in cats.

Adult heartworm can survive for up to five years in dogs and two years in cats. Cats are considered dead-end hosts, meaning that adult worms produce much fewer microfilariae (1,2).

Can humans get heartworm?

There are rare cases of humans being infected by Dirofilaria immitis. However, you can’t catch heartworm directly from your dog, since the worm must be transmitted by a mosquito.

In the 1970s and 1980s, before preventative treatment was widespread, heartworm was present in every Australian state with infection rates of between 5% and 77% depending on the area (3). Since then, infection rates have reduced dramatically but there isn’t very much information about the current rates of infection in dogs and cats in Australia. Queensland and New South Wales are considered to be areas of higher risk whereas rates in South Australia are low (4,5).

Dogs and cats living in rural areas are more at risk of infection than their urban counterparts (6). However, it’s important to stress that even indoor-only animals could become infected (5).

You can discuss the risk to your pets with your own local vet based on a number of known factors such as the prevalence of mosquitoes in your area, outdoor exercise and living in a rural area.

Heartworm symptoms in dogs and cats

Heartworm symptoms are mainly due to the physical obstruction of blood flow that they cause. As a result, dogs with only a few adult worms might not show symptoms but continue to be a source of infection for others in the area.

Symptoms develop gradually and are more severe with higher numbers of worms. Dogs with heartworm show similar symptoms to those in heart failure and might have one or more of the following signs:

These signs can be difficult to detect in animals which don’t do much exercise.  The majority of cats don’t show symptoms but are at risk of sudden death (2).

The presence of the worms in the circulatory system can increase the chances of clot formation. Clots, or even smaller worms, in the heart can break off and block blood vessels in other parts of the body, usually the lungs. This can be a cause of sudden death or other symptoms depending on where the clot blocks a blood vessel.

In severe cases, the high number of worms can precipitate a fatal condition called disseminated intravascular coagulation, where the clotting system is activated all over the body leading to formation of numerous clots (1).

How can you tell if your pet has heartworm?

Heavy burdens of heartworm will be visible on an ultrasound scan of the heart or chest x-ray. However, this won’t detect the early stages of infection by microfilariae or an established infection by a few adults.

The most commonly used test is a blood ELISA antigen test which detects proteins released by mature female worms. This can be done rapidly by a veterinarian and provides a quick answer.

However, these in house heartworm snap tests can produce false negative results if there are only a few mature females in the patient. Infections caused by male worms are possible and will return a false negative result as well. Remember that female worms can take up to six months to mature in dogs and eight month in cats. If your pet is tested during this period then the test will be negative.

Treatment of heartworm relies on killing the adult worms in the heart and arteries. The result of this will depend on how many worms are present. A dead worm will still block arteries and can potentially cause more severe symptoms. If there are few heartworms and no initial symptoms then treatment is often successful, but patients with a high burden of worms have a poor prognosis.

The increased risk in higher worm burdens can be reduced by following a slightly different heartworm treatment protocol. In this situation, treatment aims to kill adult worms in small numbers and reduce the risk of dead worms being swept away to other organs.

The current standard treatment for adult heartworms is two injections of the drug melarsomine (sold as Immiticide) given 24 hours apart.

Surgery to remove adult worms has been used in severe cases where the risk of melarsomine administration was considered high. 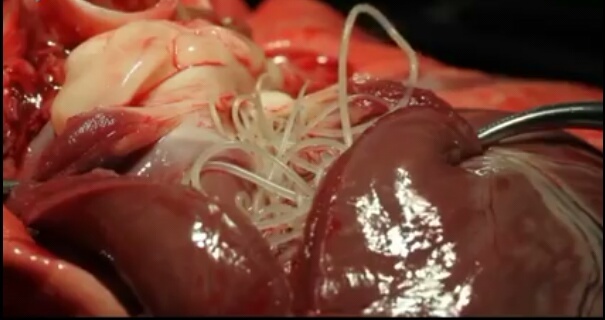 Your vet might also recommend treatment with the antibiotic doxycycline. This doesn’t directly affect the adult worms but kills a symbiotic bacteria, Wolbachia. This can reduce the inflammatory response to dead worms and reduce the chance of complications from treatment (7).

Treatment in cats can be dangerous and complicated regardless of how many worms are present. If the symptoms are manageable, your vet may suggest waiting for the adult worms to die naturally rather than risk any side effects from treatment.

Killing the adults will remove the source of infective microfilariae, but those already present can survive for four to six weeks. It’s important to remember that your dog will still be able to transmit the microfilariae to mosquitoes during this period.

Given the difficulties of treatment, heartworm is a classic case of prevention being better than the cure. You should consider preventative treatment if you live in a high-risk area or your pets are ever exposed to mosquitoes.

There is a wide range of different tablets and spot-ons for both dogs and cats. These preventative treatments are only effective against migrating microfilariae during the first six weeks after infection. This means they need to be given every month to ensure protection.

Some common heartworm tablets and spot-ons include heartgard, heartgard plus, advocate, comfortis plus, nexgard spectra, nuheart, sentinel spectrum and more. It is important to note that medication labelled as all-womers are aimed at treating gastrointestinal worms and not heartworm. Always check the product label to ensure heartworm is also covered.

An annual injection, Proheart SR-12, provides a good alternative to monthly tablets or spot-ons. This contains a similar drug as the monthly tablets but is formulated to provide continued release over a 12 month period. This injection is usually given at the same time as your pet’s yearly dog vaccinations.

Heartworm prevention can be started in puppies and kittens as young as 6-8 weeks old, depending on the product used. Before beginning a course of heartworm prevention in a dog that’s older than six months, it’s important to test your pet for heartworm to make sure there aren’t any adult worms which have already established an infection.

Not sure which heartworm prevention is right for your pet? Be sure to ask your trusted veterinarian.

If you live in Perth, Western Australia, why not utilise our house call vet service? Our mobile vet can perform heartworm tests and administer heartworm preventative injections to your dog in the comfort of your own home. We can also supply any oral or spot-on heartworm medications you need.

Can a dog get heartworms while on Heartgard or other heartworm prevention?

If your treatment is up to date and regular, then preventative treatment will stop larvae from developing to adult worms. However, if adult worms are already in the heart when you being treatment Heartgard, or other drugs used for prevention, won’t kill them.

Can heartworm in dogs be cured?

Yes, but the treatment can be dangerous, and possibly fatal, if there are lots of worms.

When can you start heartworm prevention for puppies?

Heartworm prevention can start from as young as 6 weeks old in puppies. But be sure to consult with your vet to make sure you’re using the right product.

Heartworm is not directly contagious but is transmitted by mosquitoes.

Is a heartworm test necessary before starting heartworm prevention?

What happens if you give a dog with heartworms a preventative treatment?

The adult worms will continue to live in the dog’s heart and you might be under the false impression that your dog doesn’t have heartworm. Most importantly, these adults will continue to produce microfilariae. If there are lots of microfilariae in the dog’s circulation when the preventative treatment they can die en masse and there is a risk of starting a fatal inflammatory response.

What happens if your dog misses a heartworm dose?

Let's get in touch

Give us a call or drop by anytime, we endeavour to answer all enquiries within 24 hours on business days.